In November, my boys had fun creating Element Cereal Boxes.  This easy, engaging project for kids in grades 2 – 6, can be easily used to help younger students synthesize larger works or subjects into a manageable visual format. 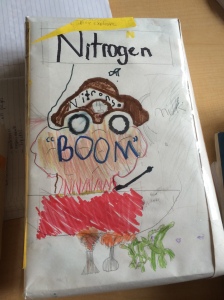 With delight, we’ve been studying Jeannie Fulbright’s Elementary Physics and Chemistry this semester.  One of the early chapters dives right into elements and the Periodic Table, which can be a little overwhelming for younger students.  After reading this chapter, I told the boys to select one of the elements that they would like to learn more about.  Naturally, they wanted to learn about volatile, explosive elements.  Who wouldn’t?  Since I wasn’t sure which ones were explosive, I told them we would just have to go to the library and find out.  The library trip produced books on Nitrogen and Hydrogen.

Making a creative title for the cereal is half the fun.

After the boys finished reading their element book, they were ready to start creating their box.  Looking back on this project, I think it would have been a good idea to have each student complete a graphic organizer while reading the material.  The graphic organizer would have been a mind map or some other organizer for collecting data about their element.  As it turned out, we just used information straight from the book and a Wikipedia page.  It’s pretty easy to document research sources right on your cereal box by making it a part of your theme.

The first information we recorded on the box was the element’s symbol and atomic number with one or two describing sentences.

N is for Nitrogen

Next we created catchy titles for our cereal based upon the element’s name and description.

In this box title above, my 2nd grader used the idea of “boom” cereal and drew an interesting picture of a car lifting into the air on a cloud of nitrogen.

Down the side of each cereal box, similar to having a list of ingredients or nutrition facts, the boys listed quick facts about their elements.

Even my second grader, who often runs from writing projects, was very engaged with writing “cool” facts about his element.  My 6th grader chose to type his fast facts.  Based upon what kind of project you are doing, you can have the students create mock ingredient lists, recipes, instructions for use, warnings, etc.  When we have done this project for a novel, I have had my kids create a game for the back of the cereal box, similar to what you might see on the back of a raisin bran box.  It takes a little more time, but if you have little artists, they love to make the game and play it too.

Working on the cover.

Before we assemble the project, I first have them wrap the boxes in heavy paper.  Then, we draw the cover theme.  I usually like to have them draw or write on a separate paper and then paste the art work or writing onto the wrapped box.  This process cuts down on catastrophic mistakes made directly on the box.  It is always easier to correct something before it is affixed to the final project than after.  The next time your kids are studying  a subject that needs to be presented visually, try creating a cereal box for it.  They will have fun, learn new presentation skills and be able to express their creativity all at the same time.